Why Are Drugs So Expensive & How Do Americans Afford Treatment? 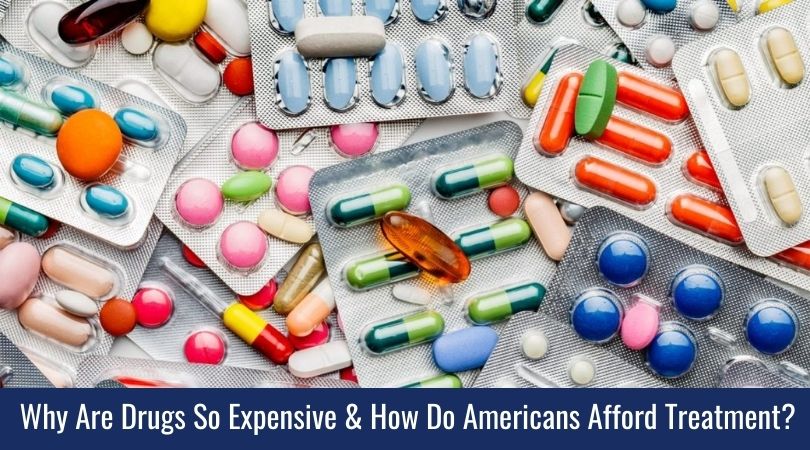 How can one injection cost $2.5 million? Why do the same medicines cost differently? What is the difference between generics and original drugs? What makes up the price of a medicine? We asked drug industry experts to answer these questions.

How is a drug developed?

To understand how the cost of drugs is formed, it is necessary to understand the movement of the drug from the container in which it is started to be boiled to the consumer. Creating a drug in the laboratory is already an expensive stage of this path.

The medicine consists of active and excipients. An active substance is a molecule that affects the body, leading to the desired therapeutic effect. When a pharmaceutical company is looking for a new molecule, they develop 10-20 different options in parallel. This process may take several years.

Not every molecule that pharmaceutical companies begin to develop reaches the market.

The cost of a molecule that has reached the market is quite low in relation to the final price on the drugstore’s shelf. The main reason for this is the huge investments of pharmaceutical companies in the development of not only a specific molecule [which became the basis of a new drug], but also dozens of others, which ended up being unclaimed.

The rules for the development of drugs are determined by the international organization ICH. These rules define the requirements for the qualifications and responsibilities of researchers, regulate the process of conducting clinical trials, and also specify the conditions for storing medicines and maintaining documentation.

The whole world is negotiating at the level of this organization. These rules are constantly being revised towards tightening, because all regulators around the world are interested in high-quality and effective medicines.

The next step after development and search is clinical trials. It is necessary to prove that the drug is effective and safe. This, according to experts, is the most expensive item in the production of drugs.

Clinical trials according to international standards include four phases. The first is a study on a small group of healthy volunteers. The second phase is the evaluation of efficiency and safety. The number of subjects is higher, and at this stage, people with a disease that is directed by this drug take part in it.

The third phase is the longest and most expensive. The drug is tested on a large number of people. Research can involve tens of thousands of people in different countries and research centers, and it can cost hundreds of millions of dollars. In case of successful completion of this part of the study, the drug is registered.

The fourth phase is post-marketing, comparing the effectiveness of the drug with its analogues, demonstrating its benefits, identifying side effects and risk factors that did not appear during the previous phases.

Therapeutic property is the same, but the price is different

Once a unique molecule has reached the market, the company that developed it has the exclusive right to it, a patent that lasts for several years. No one but this company has the right to produce such a molecule. After the patent expires, any pharmacological bureau can produce generic copies of this molecule.

Scientists emphasize that the costs of the company that produced the original molecule and the costs of those that simply copy it are incomparable. That is why the patent provides the development company with the exclusive right and the ability to keep commercially reasonable prices. However, after the expiration of the patent, prices for original drugs should fall by two to five times due to competition from high-quality generics. This is true both from the point of view of patients and from the point of view of the industry, experts believe.

The quality of the original drug remains high even after the expiration of the patent protection, even when compared with high-quality generics.

Due to the conditional high cost, many patients are not ready or cannot afford to buy an original medicine that has been tested for years, has passed all preclinical and clinical trials, and opts for generics. The competition that arises in this case also stimulates the manufacturer of the original drug to reduce prices.

Study results: Americans have to take loans to afford medication

In 2021, 37 % of Americans spent more money on buying drugs. According to the new study results, 25% of them had to take out loans to pay for emergency expenses related to treatment. Connecticut payday loans were the most demanded financial products in 2021. If approved for a loan, you will receive the money via a bank transfer in a few hours or even immediately.

To get accepted, you only need to meet a few basic requirements: to legally reside in Texas, have an active bank account, a source of a stable income (any type is ok), and some kind of identity verification.

The application process can be completed online in just 6-10 minutes from the comfort of your home. The borrowed funds can be used for whatever purpose, including to purchase expensive medication.

Why is SMA medication so expensive?

There are now three medicines in the world that help with some types of SMA. One of them, Risdiplam, is not yet on sale. Spinraza costs about $600,000 in the first year of therapy and about $300,000 in each subsequent year. An injection of Zolgensma costs between $2.1 million and $2.5 million, but is only needed once. A lot of questions have arisen about this amount.

First, the cost of developing a cure for SMA is high because there are even more requirements for such drugs than for others. This is a new experimental technology – gene therapy, so we need to prove that it is effective and safe.

Secondly, SMA is an orphan (rare) disease. It turns out that the price structure develops in such a way that the costs of developing a drug are very high, and there are few patients. One in 6,000 to one in 10,000 children are born with the disease. One in 40 to one in 50 people (approximately 6 million Americans) are carriers of the SMA gene.

International companies have the concept of a “fair price” – this is the money that citizens of a country can pay for a drug. It is calculated in advance and is based on many indicators: the assessment of purchasing power, the economic well-being of society, import duties, promotion costs and other indicators. Based on the understanding of this fair price on the shelf, the import value of goods to a particular country is largely formed.

In most cases, pricing is structured as follows: “The parent ‘company X’, which is the exclusive manufacturer of products, establishes ‘company Y’ in the jurisdiction of the target country and sells medicines to it for import into that country. [The import cost of the drug] is formed in such a way that after adding to it the costs associated with import duties, import VAT, costs associated with the promotion of the drug, storage, transportation, we get the same “fair price” on the shelf.”

According to the expert, such a “Y company” will be the only supplier of products that will be able to resell them to distributors after importing goods into the country. The markup of distributors in the retail market rarely exceeds 10%. The next in the supply chain is the pharmacy channel, which also has its own margin, 20-30%.

In the end, the drug ends up on the shelf exactly at the “fair price” – the one that “company X” calculated in advance.

What does the state control?

In the USA, the state determines the list of vital and essential drugs. The state controls the prices from this list. For those medicines that are imported into the country from abroad, the maximum registration price is determined.

The extreme measure that the regulatory authorities of the state could theoretically take is a ban on the import of medicines. For example, if the importer does not follow the pricing conditions, which may differ significantly in terms of determining a fair price. In the experts’ opinion, this is inefficient. We must be aware that the potential of the market pharmaceutical companies are directly related to two things: the size of the population and its purchasing power.

The state regulates prices for domestic medicines differently. According to experts, the majority of US pharmaceutical companies are concentrated in the generics segment, which is built on the public procurement system. Now the starting price of the auction is initially set too low. The market situation is changing, but companies are still forced to trade below the bottom.

In experts’ opinion, the legislative act, which concerns the rule of regulation of the initial maximum price of the contract, is contrary to market relations. Because of this, most of the auctions for medicines are disrupted.

Also, experts note that the state should stimulate not only the creation of generics but also the development of innovative pharmaceuticals and in every possible way support companies that are developing new, original medicines.

By developing the production of generics, scientists are restoring production capabilities, but they are not creating anything fundamentally new. And as experience shows, effective drugs are new drugs that involve non-standard solutions. Plus, any innovation entails new highly qualified jobs.