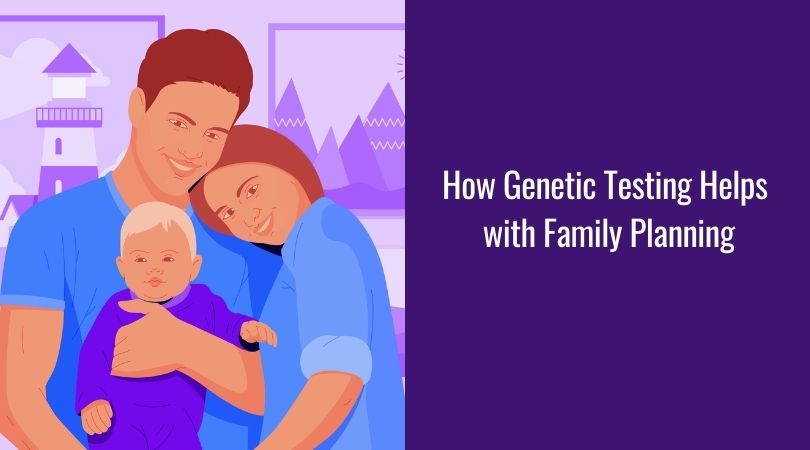 We share how genetic tests help to learn about the risks of transmitting hereditary diseases to future children, and to take timely measures to conceive a healthy child.

Why know about the risks of hereditary diseases

The human body is made up of trillions of cells. Each plays a specific role: responsible for the production of enzymes for breaking down food, transporting oxygen in the blood, or performing other functions necessary for life.

Most human cells contain 23 chromosomes from the mother and 23 from the father: total 46 chromosomes.

Genes are sections of DNA that are contained in chromosomes and are inherited. According to various estimates, humans have 20-25 thousand genes. They change when transmitted to offspring – during division, cells receive one chromosome from each pair.

Changes in genes that cause important proteins to malfunction and cause disease are called pathogenic gene variants. Depending on the degree of changes in the genes of the disease, they are divided into the following categories:

The presence of a pathogenic variant of a gene only in the mother or father does not mean that the child will necessarily develop a disease. A person can be a healthy carrier. But if both parents have the same pathogenic variant of the gene, then the risk of having a child with the disease increases significantly.

One of the most common hereditary diseases in the European population is cystic fibrosis, in which mucus accumulates in the lungs and other organs. It blocks the lungs, pancreas, and other organs. According to statistics in Europe, one in 2,000-3,000 newborns are born with cystic fibrosis. Only half of patients with this diagnosis live to 18 years, and only 5% – to 40 years.

Hereditary diseases are often incompatible with life, so it is widely believed that they are not so common. But according to statistics, 1 in 50 people are born with a monogenic disease, while 1 in 263 have chromosomal abnormalities.

More than 70,000 people with cystic fibrosis live in the world, while Shwachman-Diamond syndrome (SDS) is a rare condition that is thought to occur in approximately 1 in 80,000 newborns.

If both parents have a variant of the gene associated with cystic fibrosis, the risk of having a child with this disease is 25%. If you find out about this in advance using a genetic test, you can take the necessary measures in time, for example, use assisted reproductive technologies.

To analyze the results, geneticists created an algorithm that correlates data from samples with a database of 318 hereditary diseases. The algorithm analyzes the information received for the presence of gene variants that are responsible for health risks and carrier status of genetic diseases. A team of genetic scientists then checks the results to make sure the information is correct before uploading it to your account.

Genetic testing helps expectant parents to find out if they have carrier statuses of the same variants of genes of hereditary diseases that can pass to children. Whether the child is a healthy carrier of the disease, or whether it will manifest itself, depends on the type of disease.

Your genetic test results will show one of three carrier patterns:

The test identifies many of the existing variants of every hereditary disease. If there were genetic diseases in the family history, discuss this in consultation with a geneticist.

Often, you can get a free consultation with a geneticist who helps you sort out the test results. Geneticists specialize in identifying the risks of hereditary monogenic and multifactorial diseases, and, if necessary, will advise you to undergo additional diagnostics.

If both partners are found to carry a severe hereditary disease, the couple can plan a family using IVF with pre-gravid testing. In this case, a known healthy embryo is selected and the couple avoids the birth of a sick child.

If the test has identified pathogenic variants of genes, during the consultation, you can discuss the risks and steps required to conceive a healthy child.

Carrier status is not a cause for concern. For most people, this does not pose any threat and does not mean that the disease will necessarily manifest itself. If the test results show carriage, this should be considered when planning a family.

What genes can tell you about your health

Genetic testing can help you learn about health risks before they become a problem. But the test detects not only hereditary diseases. If you are planning a family, first of all, you should think about health in general, because you still need it to raise children.

Based on the test results, you will receive recommendations to help you improve your health indicators.